This post was commissioned by the awesome folks at J&P Cycles. They took my draft and made it much better, so read on right here, then you can read the improved version on their website in the Countersteer blog on http://www.jpcycles.com. Enjoy! 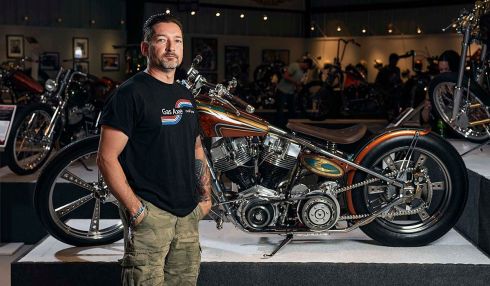 I love custom motorcycles. I’ve been to a lot of custom bike shows.  I’m a firm believer in the “rolling works of art” philosophy of the custom bike world.

My disconnect happens when it’s a competition. Then my sentiments go out to the folks who have to judge the bikes, because I’ve been in that spot too. What if I like them all? Who’s your favorite child (Sorry Joe.) Other than the rules about frames, engines, brands, etc, what makes a piece of art better than another. Did you notice that the Louvre doesn’t have weekly art competitions?

Nobody appreciates a custom bike as much as the person (or persons) who built it. Nobody knows how much it took to create a look, or to make a component as well as the person at the grinder or buffer or welder that made it happen.

My best experiences at motorcycle shows have been in talking to the builders, sometimes it’s just overhearing a story or asking a simple question that ended in a long answer, sometimes it’s over a beer many hours after seeing the bike. Tim Dixon is a great example of how this all comes together for me.

Tim is the bearer of the King of Custom Builders crown, which he earned by winning the Freestyle Class at the J&P Cycles Ultimate Builder Custom Bike Show for the 2018/2019 show series. The championship round took place in Chicago in February, and winners earned a spot in the championship by winning at one of the earlier IMS shows in the series. Tim won in New York.

Tim’s an all-around nice guy. I’d love to have him as a neighbor. His business is car, truck and motorcycle repair and customizing, but he said that no matter what it is, if it’s broken, he can fix it.

I called Tim to get some information for a news release that J&P Cycles was preparing to announce his King of Custom Builders win in Chicago.

He started our discussion with the statement that his focus on this bike was 100% on craftsmanship. I’d bet that every builder could start a discussion like that. As we continued talking, it was clear that Tim was not BSing. He’s built 30 custom bikes in the past 25 years and and he finished 26th in the world at the competition in Germany a few years ago, so he’s already got a pretty good track record on the craftsmanship thing. Then he tells me that for his current winning entry, he taught himself how to design and create the bike’s wheels. What???

Initially, Tim was going to polish everything on the bike, no paint, so he would not distract from the craftsmanship that went into the bike. but he ran out of time. (That’s a great nod to Michael Lichter and the show he organized at the Buffalo Chip in 2017. No paint on any of the bikes in the show. I can write a whole separate piece about how distracted I get by paint on custom bikes.)

Ultimately, it should always come down to craftsmanship. Tim’s been welding for 30 years (always a good start for a metal artist). He appreciates older motorcycles, so much so that he designed and built his own version of a classic wishbone frame and springer front end. He also designed and created the headlight and mirrors.

I asked Tim what the parts on the bike are that he really thinks are “underappreciated” and he went to the front motor mount and the tail spacers. He told me he spent countless hours on the grinder to get them just right.

In the past seven months Tim spent 760 hours of his spare time (he’s got a full-time job that pays the bills) on this bike. When you look close, and you talk to the artist, you start appreciating how much more this bike is than a motorcycle.

Tim’s going to use the prize from this show to get started on his bike for the world championship show in Germany in 2020.

Okay, so maybe competitions aren’t all bad. As long as the prize goes toward creating more great motorcycle art. I can roll with that.